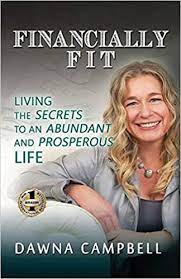 ​DAWNA CAMPBELL, known as the 'Mind Whisperer' who uses Thought Form Energy Healing as she works with clients internationally in her private practice to improve their Health, Wealth, and Relationships, will join us from Montana to discuss all that she does with her clients, pass along her wisdom to our listeners, and to discuss her latest release, "Financially Fit: Living the Secrets to an Abundant and Prosperous Life".
FROM HER WEBSITE:
"Through our mind thoughts, we produce feelings and emotions that create our life experiences. How we focus these thoughts determines what returns to us though the universe. We are consciously aware of these thought forms about 10% of the time, which means we are unaware of the 90% of our thoughts, feelings, and emotions that reside in the subconscious.  These subconscious thoughts also send out energy signals to bring back our experiences.

Thought Form Energy Healing® is a life changing method that brings about instantaneous change by releasing the emotional heavy thought forms that were recorded in the subconscious and blocked in the body, and replace the thought form with a new emotional experience to a life of happiness, prosperity, and love for you."
dawnacampbell.com

CARRIE SEVERSON, from Scottsdale, Arizona, is an author and the Chief Executive Officer of the Unapologetic Voice House, a hybrid book publishing business. She addresses burnout, fertility, and finding our own enoughness in her recent release, "Unapologetically Enough: Reshaping Success & Self-Love".


FROM HER BIO:
"She has been in the storytelling industry for nearly twenty-five years. She started the Unapologetic Voice House in 2019 after spending years pitching literary agents in the hopes of being published traditionally. All her rejection letters from literary agents came down to the same thing. They all loved the work. They all compared the work to well-known authors. But because she didn’t have a big enough platform, agents always passed on her. Carrie used that pivot in life and launched a company that could help women just like her―unapologetic in their stories without massive following. She’s married to her best friend and on her next soul quest to become the next version of herself. She can be reached at UnapologeticallyEnough.com or TheUnapologeticVoiceHouse.com.

Her book, Unapologetically Enough: Reshaping Success & Self-Love is all about discovering what it really means to be enough. Carrie struggled with her own “enoughness for years.” Like so many women, she constantly questioned if she was thin enough, wealthy enough, young enough, or fertile enough. But instead of finding answers, she ended up battling professional and personal burnout, self-love, and her status as a middle-aged woman without her own children. And it forced her to make a change.
​
Shining the light of love on both the good and the bad of that process, Severson shares her soul quest and how she learned to navigate her own enoughness. With honesty, tenderness, and vulnerability, she taps into a powerful shared reality, illuminating the experiences so many women go through as they, too, struggle to define success and self-love."
www.instagram.com/the_unapologetic_voice_house/

​If you missed a show, please click on the link below for our PODCAST page, then scroll down for the full show or segment of your choice. Thank you!